Bill Brown is a media artist interested in ways landscape is interpreted, appropriated, and reconfigured according to human desires, memories, and dreams. His films have screened at venues around the world, including the Rotterdam Film Festival, the London Film Festival, the Sundance Film Festival, and Lincoln Center in New York. Brown lives in North Carolina and teaches at UNC-Chapel Hill. 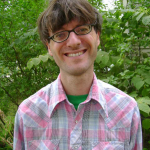