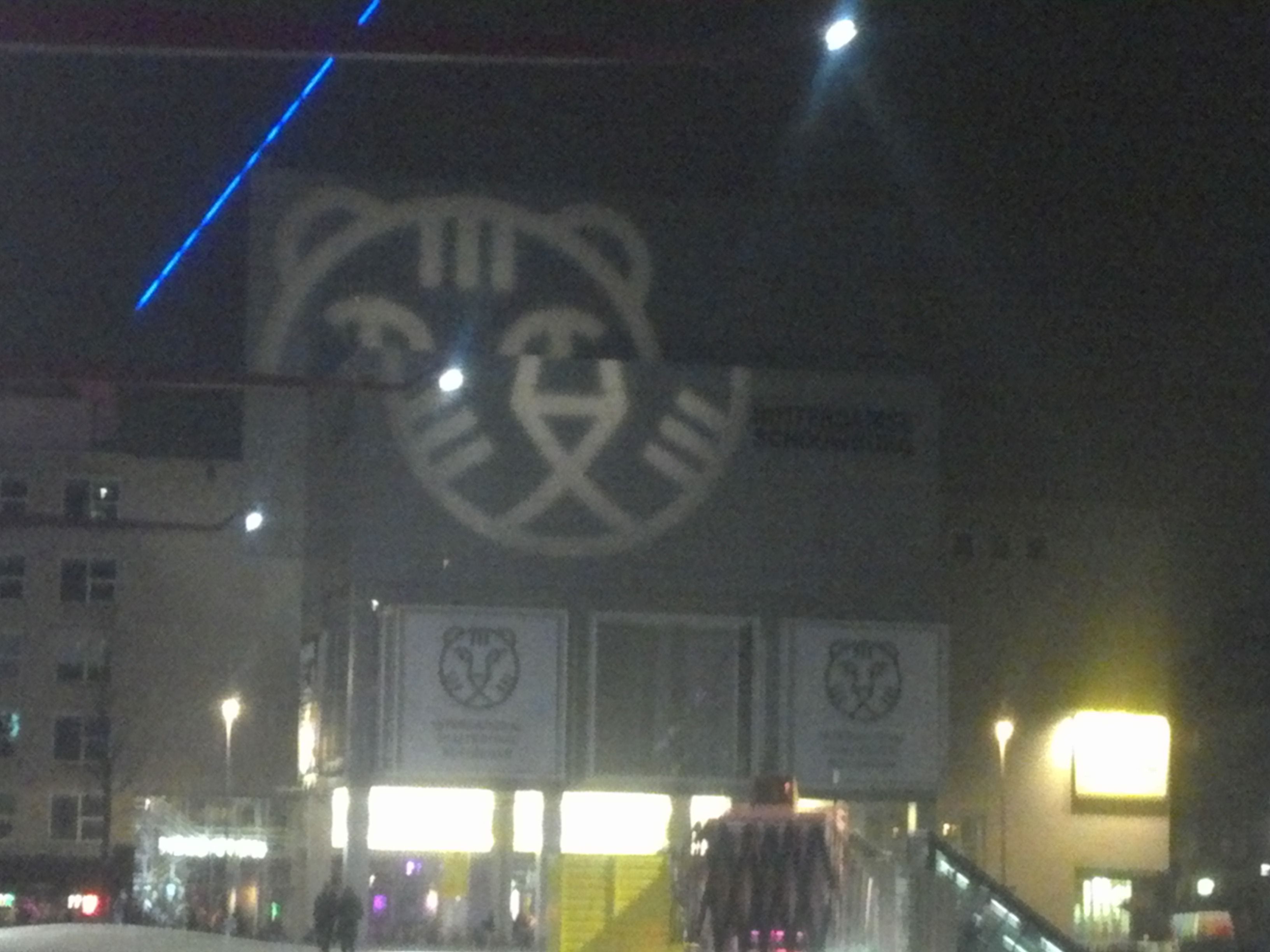 Video Data Bank was thrilled to again take part in the Rotterdam International Film Festival in late January.  Lindsay Bosch, VDB Distribution Manager reports on some of this year's goings-on.

Arriving in at the airport Thursday morning I had the pleasure of sharing the transfer to Rotterdam with VDB friend Madeleine Molyneaux.  Madeleine serves as the producer for work by Kevin Jerome Everson and is on the festival team at Rotterdam.  Madeleine had a busy schedule of presentations and program introductions during the run of the festival so she gave me a great introductory rundown of films and people to look for!  Sharing our transfer was Spanish / Venezuelan filmmaker Andres Duque whose new feature Dress Rehearsal for Utopia premiered in the Bright Futures section of the fest later that day.

After checking in at the riverfront Tulip Inn, I registered for the fest at the impressive De Dolen (a concert hall that serves as the IFFR headquarters.)  For the first time this year IFFR ran a paperless ticket system for artists and accredited guests.  We registered our ticket requests with the box office representative  -  then at the door of the screening ushers scanned our ID badges.  The new system went fairly smoothly and was very convenient (though you did have to remember what you signed up for!)  I enjoyed a walk past Paul McCarthy’s (ahem.) public sculpture Santa Claus (2001) and the famous De Stijl style Café De Unie (1925) as I headed to the LanternVenster. For the second year in a row IFFR has consolidated its shorts and arts focused features at this cinema venue.  While the location is a bit far from the De Dolen fest center, the theater is beautiful, shuttles were frequent, and the location (on an island in the Maas River) gives the vast festival a more intimate feel.

Waving Back:  This program of experimental shorts built upon an indistinct sense of dread or unease in all of the featured works.  Kevin Jerome Everson’s newest film Rodeo Trilogy was included here along with Deborah Stratman’s Village, silenced.  These works were nicely paired with new titles by Ken Jacobs and a very creepy animation by Stacy Seers.

George Kuchar: Wrap Party – I knew that HotSpell and Empire of Evil would be featured in the festival but I was surprised and thrilled by the way IFFR presented the work.   IFFR planned a special memorial screening dedicated to our friend George.  These two last works by the artist were shown together as a late-night homage.  Like his other student collaborations, Empire of Evil, can be hard to watch…but I was reminded that there is real pleasure in seeing a work that looks like it was truly fun to make for everyone involved.

On Friday morning I visited the Netherlands Architecture Institute to see Paul Bush’s new feature work Babledom.  The special exhibition of the work in the architecture museum’s theater was a perfect meeting of venue with an artwork.  Bush’s piece, which uses contemporary architecture imagery to suggest an urban sci-fi landscape, was well matched the 1993 postmodern design of the museum itself. Later in the afternoon, I ventured away from the LantarenVenster island to enjoy the features films So Sorry & Ordos 100.  Though very different in tone, these two world premiere documentaries by Chinese artist/activist Ai Wei Wei, were paired together as a double feature.  Ordos 100 elicited laughs as it charted the logistical and cultural stumbling blocks that derailed the international Ordos architectural showcase. So Sorry observed Ai Wei Wei calling the Chinese government to account after the Sichuan earthquake, actions that lead to his police beating and eventual arrest.  Shown together, the films provided a dual portrait of government power that is at once oppressive and yet ineffectual.

Life’s Full of Wonders -  This program brought together works that hung on hypnotic soundtracks.  Praca Walk Disney (Walt Disney Square) by Renata Pinheiro & Sergio Oliveira of Brazil playfully combined performative elements with observations of daily street life to create a "quasi-musical" on the streets of Recife,   Also of note was the meditative Square Dance Hypnotist by Allan Brown, a work in which a progressive loop of square dance imagery somehow matches in mood and tone with a chilling 911 call.

Tiger Awards – Program 2 -  The competition programs were notoriously hard to get into, but a good samaritan offered me his ticket for Friday evening's screening.  I was particularly charmed by  Cao Fei’s Shadow Life, with performers evoking fables and communist rallies through hand movements. Generator by Makino Takashi went on to tie for the Tiger award, was a striking and beautiful abstract reaction to the Fukushima disaster.

Puzzled – Ben Russell’s River Rites stood out in this shorts program that highlighted footage remixes and interventions. Filmed on the Upper Suriname River, a driving soundtrack and alterations of speed and time elevate the observed scene to something otherworldly.

On Saturday morning I attended a Press and Industry screening for DINAMO (Distribution Network of Artists' Moving Image Organizations).  Rebecca Clemen of EAI screened two versions of newly restored footage from David Wojnarowicz's Fire in My Belly, providing much needed archival context in which to frame this year's debate on the work.  Later that morning Rebecca was joined by Ben Cook from LUX, curator Brent Klinkum, artist Diamantes Narkevicius and curator Sergio Fant for a panel discussion titled "Experimental Films in A Material World."   The panelists reviewed the challenges and compromises that regularly beset exhibition and screening of video art and experimental film.   Everyone agreed that a perfect (or even 'auratic') viewing experience of an experimental film is a difficult goal.  However, Ben and Rebecca eloquently argued for the role of the distributor as an organization that can ensure that work is presented in ways that approach this ideal and that are more in line with the artists' intentions.

100 Meters Behind the Future - It was my great pleasure Saturday afternoon to speak with VDB artist collective eteam about their new installation/performance/interactive work commissioned for the festival, 100 Meters Behind the Future.  This "screening" was the hottest ticket in Rotterdam (as each showing only had two front row seats!)  For the work, eteam harnessed a local troop of actors,  a small fleet of vans and drivers, and a suite of technology to create an entirely new cinematic experience.  The artists were kind enough to give me a preview, and as I rode along, I viewed a navigation video screen and tried to help the driver keep up with the footage of the "present" that was shown there. Discrepancies between the scene out our window and the scene on my screen spun themselves into mini-narratives as we drove. The work highlighted the cinematic element of the street scene, and also focused my attention on inevitable technological lag of the remote "live" viewing experience. Moving along, were always a few meters and few seconds behind what was happening outside. The work draws an elegant physical metaphor between the time and space and in doing so points to the storytelling capacity of that tiny, in-between moment of digital relay.

Secret Codes - On Saturday night I joined VDB artist Jesse McLean for the premiere of her newest work Remote as part of the a shorts program Secret Codes.  McLean's work combines snippets of foreboding film dialogue (selections at once half-remembered but difficult to place) with atmospheric scenes that bristle with unseen presence and the possibility for action.  The sense of potential energy elicited by Remote paired will with the next short Joule by Nadia Ranoccho and David Zamagni.  The 2010 observational short film considers the myriad ways people expend energy.

I woke early on Sunday morning to present new releases from VDB as part of the DINAMO Press and Industry screenings. I was grateful that a number of people were willing to spend their early Sunday morning with us (as well as fellow distributors V-Tape and Arsenal.)  The projection quality at the LantarenVenster is beautiful and we are thankful to IFFR and particularly Peter van Hoof for making our screenings of Shayne's Rectangle (Dani Leventhal), The Well of Representation (Evan Meaney) and OWS Newsreel No. 5 (Jem Cohen) a great success.  After our screening I joined fellow DINAMO distributors at our annual meeting where we discussed issues relating archival and contractual best practices as well as the realities of governmental funding cuts for film & video organizations.  In the evening I was able to secure a ticket to the sold out presentation of The Invader by VDB artist Nicolas Provost, which had its premiere at Venice this year. Finally, I closed out my first Rotterdam Film Festival at a party hosted by the EYE Film Institute (which was impressively held partially outdoors despite the chilly temp!)

Sound Bites - On Sunday evening VDB took part in this special thematic program.  Fifteen DINAMO distributors of experimental film and video screened works from their collections which featured "unexpected examples of sound bites or sound-that-bites."  The screening showcased the diversity of work held by non-profit distributors as well as the excellent work done by these organizations in archiving and preservation.  VDB closed out the sold-out program with a screening of 1995 classic German Song by Sadie Benning.  Also of note was the cheeky Elektrotechnique (Lernert & Sander) presented by NIMk and the affecting Woodcarver (Ehren Thomas) from V tape.

ART:FILM Panel - This large scale panel hosted by Cinemart garnered lots of talk durning the festival and focused on models of transition and cooperation between the art world and the wider film world.  The panel included Mike Goodridge (Screen International) in conversation with Stuart Comer (Tate Modern), Simon Field (Illuminations Films), Tine Fischer (CPH:DOX ), Bartomeu Marî (MACBA), Nicolas Provost (Artist/filmmaker), Wilhelm Sasnal (Artist/filmmaker) & Meghan Tomeo (Anton Kern Gallery).  I was impressed by the breadth of the panelist's experience -- it was very nice to have gallerists, artists, fest programers and museum programers together in one conversation.  The panelists discussed the challenges of funding and distribution for art features and which have the possibility for a more mainstream "crossover" success.  They shared a number of interesting funding experiments including MACBA's commission of art film features for its collection, the Kern Gallery's partial funding of Wilhelm Sasnal's film through proceeds from his painting sales, and the FACT Gallery's partnership with film festivals to commission artworks that will show as both installations and as feature films.  The panel struck very much the same theme as that of yesterday's "Experimental Films in a Material World."  Both conversations emphasized the importance of a certain flexibility in allowing new moving image work to move across and between visual spaces of presentation.  Panelists in both discussions attested to the very real possibility for media to have a wide existence on multiple levels of exhibition, for a variety of audiences.