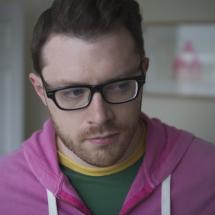 "I think artists and designers cultivate their practices in response to problems in the world or within themselves."

To celebrate the release of Evan Meaney's first Interactive Virtual Reality work ++ We Will Love You For Ever, Video Data Bank sat down with him to talk about his background, art practice, and future projects. Meaney's work explores liminalities and glitches of all kinds; equating failing data to ghosts, seances, and archival hauntology. He has been an artist in residence at the Wexner Center for the Arts, a founding member of GLI.TC/H, and a contributor to The Atlantic. More recently, Meaney has worked with the super computing team at Oak Ridge National Laboratory on projects made possible through the National Science Foundation.

I was born in Astoria, Queens in the 1980s. When I was young, my mother took me to the Museum of the Moving Image (Queens, NY) for one of the very first video-game-as-art exhibits. There I played the 1983 Star Wars arcade game. Then as I became older, I watched movies by Hollis Frampton and Joyce Wieland. I read Gertrude Stein and thought about patterns. I wanted to be an experimental filmmaker, but my heart was all ones and zeroes. Video, especially digital video, made sense to me on a protocological level. I make video art and video games and VR experiences. I teach art-making to college students. I have developed projects at artist residencies and super computing facilities. I still play the Star Wars arcade game when I see it. I find the art style to be calming, but can’t put into words why.

2. What inspired you to become an artist?  To engage with New Media?

I am really interested in communication technologies, and the more abstract the communication, the more interesting the technology. Art is a word we use when words fail us, and I have a consuming passion for that discrepancy. Along the way, I had some amazing teachers who encouraged me to branch out from a background in cinema to other forms. I like to tinker, I like to find the edges of a system, and new media (for lack of a better term) encourages that level of mechanical play.

I did. I went to college in New York and then grad school in Iowa. I enjoyed those experiences because I was able to engage with many artworks that would not have innately been on my radar.

I’m not sure, for me at least, that art and life are separate things. I’m a professor of new media and gaming, so there is a lot of cross over there. My hobbies are generally art/computer/game/media/electrical based, so there’s crossover there too. I don’t think I could separate the hours I spend working from the hours I spend making things because they seem like the same hours.

Many things. I think artists and designers cultivate their practices in response to problems in the world or within themselves. My work may be a little of both. As I’ve gotten older, I think absurdity has come into play a little more in what I produce. So many of my previous works were about probing a system to find its structure, but now I’m satisfied with the knowledge that many things out in the world resist observable structure entirely. They exist against the expectation of order, and maybe that’s great. Beyond that, I’m motivated by a combination of fear, ego, and death — just like everyone who makes anything.

So many. Some of the things happening in virtual and augmented reality are really interesting. I like seeing how other, older forms of media respond to this new injection of immersion. I’m interested in the effects social media and social media performance have had on documentary-based media and the complications posed by 360° video in those genres. I also think we’re living in a golden age of video games right now. I’m very excited by work from Porpentine, Lucas Pope, Cardboard Computer, Brendon Chung, Nina Freeman, Cara Ellison, DiMoDA, Hannah Piper Burns, and Ana Anthropy to name a few.

Not the last one I saw, but a recent one that sticks out would be Miyö van Stenis’ work at the Digital Museum of Digital Art (dimoda.art). I’m also super excited about Behind White Shadows at Transfer Gallery (Brooklyn, NY).

8. What has been the best experience exhibiting your work?

The first time I won an award at Ann Arbor Film Festival (MI) was a big deal for me. I showed Ceibas: Epilogue — The Well of Representation, and the response was very positive and encouraging. Ann Arbor was the first festival I fell in love with. I went there in college and could not believe that such a subtle spectacle existed. I replayed the movies I saw in my head during the fifteen-hour drive back to New York. I had a crush. Then, some years later, I screened in the main theater. I got up for the Q & A wearing a pink hoodie. David Dinnell asked me a question and I felt amazing.

I’ve planted a garden for the first time in my life.

10. How do you start a piece?  How do you know when a work is complete?

My pieces always start with questions. I have a file where I keep general questions, then they become more specific, then absurdly specific, then the question marks change to exclamation points, and by then I’ve usually started making the actual project. I’m definitely more of an editor than I am a generator, so I usually try to put everything into the directory or timeline or bin or frame, and then whittle back down. I like the process of exorcism. I also like cleaning my house or making my bed – go figure. I’m never sure when the work is complete. I stay up thinking about it. This is where the VDB is very good for psychic well-being. When they collect a piece, I can’t really change it any more and thus, it’s done. I sleep better. Not well, but better.