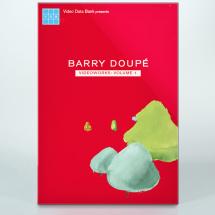 Can you tell us something about your background?

I grew up in British Columbia, Canada on a couple of different family hobby farms. We also moved around a lot in BC, living all around Vancouver Island, Salt Spring and Sointula. Eventually I came to Vancouver to study art and animation at the Emily Carr University, where I'm still living today. My background is in drawing, painting, writing and collaboration, which all work their way into my media practice. I can see how growing up in a fairly isolated, wooded environment has shaped some of the imagery that I'm drawn to, and also a kind of fascination with city life, office buildings and architecture.

What inspired you to become an artist? To use video?

I'm inspired by the process of making and the translation of thoughts/feelings into relatable stories. It compels me to investigate the world around me in a way that brings me closer to it. Animation is in a unique position of being able to offer a highly abstracted, constructed experience. It's a direct, personal expression.

Did you have formal art training/schooling?

I went to the Emily Carr University to study animation, where I received a Bachelor of Media Arts in 2004. Before that I was taking private drawing lessons from a woman who had previously animated at Disney Studios, and taking Life Drawing lessons when I was a teenager.

How do you balance life and art? Are you able to make a living through creating art?

I have received grants and commissions to make work, but often I also prefer to have a part-time job on the side. It gives me time away from the art, which is important. It's important to be able to put an idea on the back burner for some time and let it develop naturally.

What influences or motivates you in the world?

I'm motivated by a desire to be close to things, in a real way. I want to look at beautiful things and be happy. I want to be hungry and have that hunger fulfilled.

What artists or movements are you following right now?

I'm following Dennis Cooper's blog. He's a writer who features a different artist/writer/musician/artwork each day. He also responds to any comments that you leave in the discussion forum. It's a great resource, and he has great taste.
I'm also following my friend and collaborator James Whitman, who's making some very beautiful drawings lately.

What was the last exhibition you saw?

I was just in New York, and saw an amazing show by Thomas Lanigan-Schmidt called Tender Love Among the Junk at PS1. He makes these really beautiful constructions out of simple materials like tin foil and dollar store lasagna pans.
I also liked the Rosemarie Trockel show, A Cosmos, at the New Museum. I was also in Toronto and saw Christian Marclay's The Clock at the Power Plant Gallery, which was nicely paired with Omar Fast's work. I especially enjoyed CNN Concatenated, which cobbled together snippets from CNN news anchors and reformed their words into poetic, ironic sentences deriding the news media.

What has been the best screening experience of your work?

I enjoy the first screening of a new work. I have a ritual where I only invite my close friends to see it for the first time. I don't typically show anyone until it's done, so it's a relief to have it exist outside of myself. Sometimes I'll show a rough in-progress version at an artist talk, but that's more for me just to see how the timing feels in front of an audience. I'm not really looking for feedback in that situation. I remember the first time I screened Ponytail in my friends' living room, it was really something. We had a long discussion afterward. It really helped me figure out what I was doing and get some critical dialogue around the work.

What are you working on right now?

I've been thinking about a new long-form work. I'd like to have it be a live action piece with actors in a studio, if I can get the funding together. There's also a book project in the works next year through the Center for Art Tapes in Halifax.

How do you start a piece? How do you know when a piece is finished?

It depends. Sometimes a piece is in part a reaction to the previous piece that I made. Usually, I'm trying to find the parts that I think worked, and expand on them. Either that, or I take on a new direction. I'm always writing down ideas into lists, so I have a bank of things I want to try. Sometimes an idea won't leave you alone. I just have to see it take shape. The first scene that I make usually isn't the first scene in the film, but a scene that I would find the most challenging to make, so that I have some kind of reference point for the other scenes.

When I start out I have an agenda of things that I want to have happen in the piece. When I feel like all of those things have been resolved, it's finished. An image has a composition, and so does a film. But you can only see a films' composition after you've finished watching it. It flattens out, containing all of the same graphic elements that an image does: balance, contrast, weight, color, space, repetition, texture, etc. that an image has. I'm looking for a particular harmony in the image of the films composition. I consider the entire effect of the experience in that sense.

What are you currently reading? Watching?

In these three early works, you can see how I am making a transition from hand-drawn animation into computer animation. At times that transition is really wonderful. I'm exploring different techniques quite radically, shifting the visual language from scene to scene. The structure of these works is defined through the use of vignettes and rhyming images to try and tease out an abstract narrative premise. It's interesting to watch as a precursor to my current long-form work, more rooted in language and narrative.

Barry Doupé is a Vancouver based artist primarily working with computer animation. His first three animated works, A Boy on the Dock Blowing His Nose, Distraught Mother Reunites with Her Children, and At the Heart of a Sparrow, produced from 2004-2006, have been compiled onto Barry Doupé Videoworks: Volume 1.

Artist(s)
doupb
Single or Compilation Product
Barry Doupé Videoworks: Volume 1
A Boy on a Dock Blowing His Nose
Distraught Mother Reunites with Her Children
At the Heart of a Sparrow