About the Fund
Mission Statement
Challenge to the Field Award
Funded Projects
Board of Directors
Who Was Lyn Blumenthal?

Before her untimely death in 1988, Lyn Blumenthal was recognized as a leading and innovative experimental feminist media artist and teacher. Her multi-disciplinary body of work included videos, sculpture, drawings and critical essays. Along with Kate Horsfield, she founded the Video Data Bank at the School of the Art Institute of Chicago. The VDB received international recognition for its innovative interviews of artists. The VDB's video art distribution network soon became a standard in the field and has been emulated by many other organizations.

The LBMF existed to carry on Lyn's spirit and vision in the field of Media Arts. The Fund reflected her legacy of leadership and innovation in encouraging technical and intellectual risk taking, access for marginal voices, radical politics, analysis of cultural issues and the integration of theory and practice.

In 2001, the Lyn Blumenthal Memorial Fund announced the Challenge to the Field Award. It was a bi-annual award given to a U.S. based artist, organization, or critic to realize an innovative strategy or project within the field. A number of well-established professionals in the field were invited by the Board to recommend names of artists whose work has challenged and expanded the media arts. The Board of the Lyn Blumenthal Memorial Fund reviewed the applications and chose an individual or group to produce a project that continued in the spirit of Lyn Blumenthal's legacy.

The Lyn Blumenthal Memorial Fund existed to carry on the spirit, vision and impact of Lyn Blumenthal's professional and artistic contributions to experimental and independent media. The Fund was guided by Lyn's legacy of:

Challenge to the Field Award

In 2001, the Lyn Blumenthal Memorial Fund announced the Challenge to the Field Award. It was a bi-annual award given to a U.S.-based artist, organization, or critic to realize an innovative strategy or project within the field. A number of well-established professionals in the field were invited by the Board to recommend names of artists whose work challenged and expanded the field of media arts. The Board of the Lyn Blumenthal Memorial Fund reviewed the applications and chose an individual or group to produce a project that continued the spirit of Lyn Blumenthal's legacy.

Kathy High is a media artist, curator, and teacher living and working in Brooklyn and upstate NY. Her single channel videotapes include both documentary and experimental forms, and she works with topics including science and the body, animals, and the paranormal. Her video work has been shown extensively, and she has received numerous awards including grants from the Rockefeller Foundation and the NEA. High currently teaches video in the Arts Department/iEAR at Rensselaer Polytechnic Institute, Troy, NY. She edits FELIX: A Journal of Media Arts and Communication, which encourages dialogue among alternative media makers (http://www.e-felix.org).

Jeff Mendoza is the principal of J. Mendoza Gardens, Inc, in New York City. Since 1987 JMG Inc.'s exceptional gardens have been widely published in numerous books and magazines such as House & Garden, Garden Design and Horticulture. JMG Inc.'s innovative design solutions with unusual plant combinations are widely admired for their originality and beauty.

Adriene Jenik is a media artist and Associate Professor of Computer & Media Arts at the University of California, San Diego. Her works include the short video What's the Difference Between a Yam & a Sweet Potato?, the 'zine ScreamBox, the live satellite broadcast EL NAFTAZTECA: Cyber-Aztec-TV for 2000 A.D. (with Guillermo Gomez-Pena), and the interactive CD-ROM road-movie MAUVE DESERT. Her most recent project, a series of experiments in internet-based street theater, is archived at www.desktoptheater.org.

Steve Seidmon is President of Seidmon Associates in New York City, a full service media research and consulting company that specializes in branding, marketing strategy, and new product development. Prior to establishing the consultancy, Steve held executive positions for ten years at MTV Networks. Besides serving on the LBMF Board, Steve is currently a national board member and co-chairperson of the Leadership Council of GLAAD: the Gay and Lesbian Alliance Against Defamation. Steve and Lyn were first cousins, and preserving the familial side of Lyn's life is an important part of honoring her memory.

Chris Straayer is an Associate Professor and Chair of the Department of Cinema Studies at New York University and author of Deviant Eyes, Deviant Bodies, published by Columbia University Press. Her articles on film and video have appeared in numerous academic journals and anthologies, and she has curated multiple programs including Lesbian Genders at the Whitney Museum of American Art. She serves on the editorial boards of the Journal of Television and New Media and The Velvet Light Trap, and on the directorial boards of the Consoling Passions Conference on International Television, Video and Feminism and the Lyn Blumenthal Memorial Fund for Independent Video and New Media.

Gail Sax received her MFA from the School of the Art Institute of Chicago. She was Director of Distribution and Director of Special Projects for the Video Data Bank, and taught electronic media at SAIC. Gail also received a law degree and works as a lawyer and advocate in Toronto. She is currently investigating cultural policy issues.

Nancy Bowen is a mixed media sculptor who lives in New York. Her work explores metaphors of the body and other types of organic form. She has had solo exhibitions throughout the United States and Europe and her work has been reviewed widely. She has won awards from the National Endowment for the Arts, the New York Foundation for the Arts and the European Ceramic Work Center. She is currently an Assistant Professor of Sculpture at Purchase College, State University of New York.

Kate Horsfield, Co-Founder of the Video Data Bank (with Lyn Blumenthal), is currently Executive Director of the Video Data Bank. Lyn and Kate produced over 60 interviews with emerging and prominent artists in the 1970s and she also produced two videotapes, Fuego di Tierra, a documentary on the life of the Cuban-American artist, Ana Mendieta, and Queers 'n Steers, a documentary on the Texas Gay rodeo. Kate was on the Board of the Independent Television Service for six years and currently sits on the NAMAC Board, as well as the Lyn Blumenthal Memorial Fund Board.

Kathy Rae Huffman is Director of Visual Arts at Cornerhouse, Manchester's international media arts center. A curator who specializes in web-based initiatives and new media works, she is a pioneer supporter of artists working in media, theory and practice. She coordinates the international Web3D Art on-line exhibition, and FACES, a mailing list for women in media. 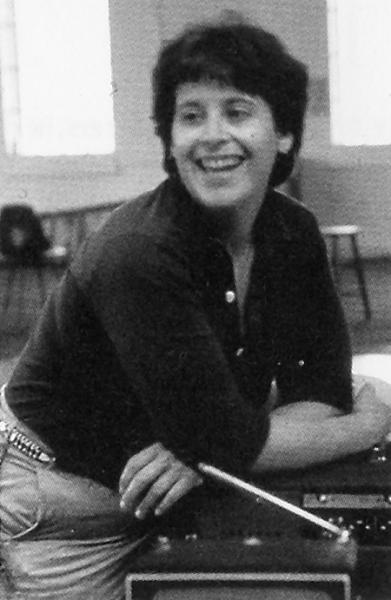 Who Was Lyn Blumenthal?

"I had heard about Lyn long before I met her in the mid-70's and I had heard strange and wonderful things. When I finally met her, suddenly there she was across the room, and because there were so many wild and fantastic stories and rumors that had sprung up around her, suddenly I felt pretty much like the way a hunter feels when they first see a deer that they've been stalking for years.

There she is! I had been cautioned that she was somehow dangerous and yet I liked her right away. I started talking to her and I liked her, and I thought this person isn't the terrorist that I've been told about."
— John Manning, Professor of Art and Technology, School of the Art Institute of Chicago

" Lyn Blumenthal had a passion for image, and the immanence of desire within the image. She recognized the power of the media and desired to reconstruct it. Lyn was fearless, unafraid to be criticized in a community that some considered small for constructive derision. At heart, she was a feminist, a passionate supporter of sexual difference, and an outspoken voice for sexual preference. Lyn was a brave champion of all artists struggling to decode the hallucinatory world which has re-presented the world of reality, the spectacle (now fact) called television. She was a natural entrepreneur even before business became art. Lyn wore her many hats with the panache of high Japanese fashion. In my mind's eye she has scale, she is grande. "
— Bruce Yonemoto, artist

"The day we opened the library in the new school building (at the School of the Art Institute of Chicago, September, 1976) here on Columbus Drive, Lyn and Kate appeared at the door at nine o'clock in the morning and said "We're the Video Data Bank, where's our office?" What office? Nobody even thought that to run the Data Bank you might need an office and a telephone, and even a desk! So we opened up a little closet in the back of the library which was about three feet by three feet, and we put in a counter and a telephone and we said: "There's your office!" And for at least a year, or maybe more, the two of them, well not both at once, but one at a time, sat in this little closet; and from that tiny space, they built this world wide operation called the Video Data Bank. That is how I remember Lyn, building something that good and that big out of this tiny little three by three broom closet."
— Nadine Byrne was the Librarian in the John M. Flaxman Library at the School of the Art Institute of Chicago.

"In the summer of 1984, the Video Data Bank was doing the first Video Drive-In at Grant Park. They were presenting the Science of Fiction / The Fiction of Science, which were two evenings of video projected onto a big screen that was hung in the bandshell in Grant Park, Chicago. The crowds were expected to be about 5,000 people each night and it was also supposed to rain that weekend. Both Lyn and Kate were very worried that this was going to ruin the Drive-In. As part of my professional duty working in the Office of Public Programs and Information at the School of the Art Institute of Chicago, I was asked to call a special pilot's weather service every hour to find out the forecast. I would report in every hour, but most of the time I couldn't get back to Lyn and Kate on the phone because they were over in Grant Park cleaning off all of the 5,000 metal chairs with paper towels, so that when the audience did come they could sit on dry chairs. To me that's an image of their generosity and how important it was that video reach the public."
— Cynthia Chris has just finished her PhD.in Media Studies at University of California, San Diego.