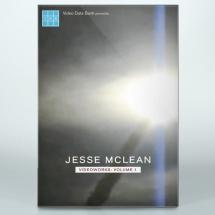 Can you tell us something about your background?

I'm from Pennsylvania, I grew up both in Philadelphia and Pittsburgh. I was always encouraged artistically by my family, especially my mother who is an artist. She went back to college when I was in elementary school and studied filmmaking with Amos Vogel at UPenn. I was in a lot of her Super 8 films, it always seemed like a lot of fun but also a lot of work. I didn't want to be an artist as a kid, I thought I'd do science or journalism, art seemed too unstable. More importantly, I didn't understand at the time that art is a great place for a curious mind.

What inspired you to become an artist?  To use video?

A good friend in high school helped me broaden my scope of what art could be. She was taking a Super 8 class at a place called Pittsburgh Filmmakers and I decided to take the same class. Once I started editing, I was completely hooked. I didn't use video until 2000, because I thought VHS looked bad, which is hilarious to me now. I learned it as a potential "job skill".

Did you have formal art training/schooling?

Yes, but it's patchy and unusual. My undergraduate degree is in studio art though I did attend New York University for a semester to study 16mm filmmaking. After college I worked in the film industry in NYC where I was a grip in the lighting department and learned a lot about what I didn't want to do as a filmmaker. Eventually I moved back to Pittsburgh, started taking classes at Pittsburgh Filmmakers and ended up working there. This is really when I became exposed to experimental cinema and alternative practices to conventional narrative filmmaking. I got my MFA in Moving Image at University of Illinois at Chicago.

How do you balance life and art?  Are you able to make a living through creating art?

I teach cinema production at University of Iowa to make a living but I also enjoy it. Prepping for classes and engaging with students and other faculty/staff helps generate ideas for work and stimulate creative thinking. I got exposed to some great internet tropes that I used heavily in my latest work via a former student of mine. Of course I would like more studio time, but I like being busy.

What influences or motivates you in the world?

People are the biggest influence, undoubtedly. Their emotional relationships to each other and their surroundings. And media, the way we see ourselves through and in it.

What artists or movements are you following right now?

The New Aesthetic. I'm kind of kidding because I still need to learn quite a lot about that, but I'm certainly interested in how the digital age is affecting our behaviors and our art practices. I use a lot of appropriation and believe in sharing ideas, images and sounds. I like to see something familiar become defamiliarized. I disapprove of a need for originality, it wipes out what is really great about human behavior, our ability to collaborate. I'm certainly interested in what people like Jon Rafman, Cory Arcangel and Oliver Laric are doing. I follow Shana Moulton and Michael Robinson, of course. I've also recently been inspired by Laida Lertxundi's films.

What was the last exhibition you saw?

I was at CPH:DOX a few weeks ago and saw some terrific films. Because I teach in Iowa, I look at a lot of stuff online. I think the last gallery show I saw in person was Eric Fleischauer's show at Document in Chicago. There are so many good artists and filmmakers in Chicago, too many to name. I'll be heading to Chicago soon to see the Steve McQueen exhibit at the Art Institute.

What has been the best screening experience of your work?

I don't have a best but I really enjoyed screening at Conversations at the Edge (series presented by the School of the Art Institute of Chicago's FVNMA Department, Video Data Bank, and the Gene Siskel Film Center) because I got to share the screening with Kent Lambert, who is a terrific artist and person. Also the conversation after the screening was a lot of fun. And the event sold out so that felt good.

What are you working on right now?

I just completed a new piece titled The Invisible World but in the process of making it another work began to emerge, something that will broadly straddle ideas related to the cinematic experience, memory, portrayals of reality and being dislocated as a protagonist and a viewer. I just wrapped The Invisible World a few weeks ago so I'm starting to switch gears and head into this other work. Stylistically, I imagine it will be similar to another earlier work of mine, Remote but it will be something of a comedy. In Remote I was blurring the line between footage that is appropriated and footage that I generated, and the result created a viewing space that is uncannily familiar. I'm looking to do something similar in this new work. Additionally, I'm also developing some gallery pieces for a solo show I have next fall at my gallery in Brooklyn, Interstate Projects.

How do you start a piece?  How do you know when a piece is finished?

Art is an arena where I trust myself. I am good at letting ideas simmer until they are well-formed and getting better at weeding out ideas that won't go anywhere. I tend to pick some big themes and dig into them, looking for ways to get specific and/or ways to put odd combinations together that complicate these broad subjects. I get inspired by idiosyncratic bits of information, headlines, articles, a story someone told me. Textual information and personal narratives are probably my biggest sources of inspiration. I also love finding shots in films that I can repurpose, a wide shot that becomes something totally different without the original sound. There's so much material out there and once you let go of the conventional narrative strategies used by most feature films, there is so much potential. I like collage as a strategy, both in terms of production and critical thinking. Art became infinitely more interesting for me as a maker when I realized I could throw a lot of ideas into the pot, sourced from all over.

What are you currently reading? Watching?

Jesse McLean's work interpolates the production, proliferation, and consumption of televisual experience, investigating how this transfer of information creates a bind of complex relationships between maker and viewer. Her videos, The Eternal Quarter Inch, Somewhere Only We Know and The Burning Blue (aka The Bearing Witness Trilogy), produced in 2008 and 2009, have been compiled onto Jesse McLean Videoworks: Volume 1.