Abigail Child has been at the forefront of experimental writing and media since the 1980s, having completed more than thirty film and video works and installations, and six books. An acknowledged pioneer in montage, Child’s early film work addressed the interplay be- tween sound and image in the context of resh aping narrative tropes, in a manner that prefigured many contemporary and future media concerns. Her major projects include Is This What You Were Born For?: a 9 year, 7-part work; B/Side: a film that negotiates the politics of internal colonialism in New York City; 8 Million: a collaboration with avant-percussionist Ikue Mori that re- defines the “music video”; The Suburban Trilogy: a modular digi-film that prismatically examines a politics of place and identity; and MirrorWorlds: a multi-screen installation that incorporates parts of Child’s “foreign film” series to explore narrative excess. A new film, A Shape of Error, is constructed as an imaginary ‘home movie’ of the life of Mary Shelley.

Child has exhibited worldwide, with retrospectives at Anthology Film Archives (NY), the San Francisco Cinematheque, Sala Trevi in Rome, Exis (Korea), and Harvard Cinematheque, and in important showcases such as The Whitney Biennale, the Viennale and MoMA’s Millenium show. Her work is featured at numerous international film festivals, including the New York Film Festival, Rotterdam, Locarno and London Festivals, among others and is in the permanent collections of MOMA, NY, Centre Pompidou, and Arsenal Berlin. Child has received numerous awards and accolades, including the Rome Prize, a Radcliffe Institute Fellowship, Guggenheim Fellow, Fulbright Award and the Stan Brakhage Award. Harvard University Cinematheque has created an Abigail Child Collection dedicated to preserving and exhibiting her work. As a teacher at the School of the Museum of Fine Arts, Boston, Child has been instrumental in building an expansive media and film art program; she has influenced a generation of younger artists. Child is also the author of five books of poetry (A Motive for Mayhem, Scatter Matrix and Artificial Memory among them) and a book of critical writings: THIS IS CALLED MOVING: A Critical Poetics of Film from University of Alabama Press (2005). 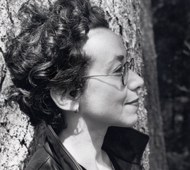