In the 1960s, New York City’s SoHo district had more video artists per square block than the rest of the country put together. In 1976 exhibition facilities like The Kitchen, Global Village, and Anthology Film Archives joined with a number of individuals to organize Cable SoHo in an attempt to place video art on Manhattan Cable Television. Later that year, the Artists’ Television Network (ATN) was incorporated. Supported through funding from the New York Council of the Arts and the National Endowment for the Arts, ATN commissioned artists to create works for television cablecasting. The non-profit corporation provided production and post-production facilities, and paid expenses incurred during production.

Laurie Anderson, Gregory Battcock, John Cage, Douglas Davis, Jean Dupuy, and a host of others, were among the initial artists whose works were produced by ATN. While video art is most often confined to the exhibition arena, the Artists Television Network was committed to the development of “television” as an artistic medium, and to the distribution of contemporary arts programming to a broad-based television viewing audience. Through SoHo Television and the Live Show, ATN presented regular weekly telecasts of programs composed of original, innovative works by visual and performing artists on Manhattan Cable from 1978-83. In 1988, these tapes were donated to the University of Iowa. A small cross-section of these ground breaking productions is currently being distributed through Video Data Bank at the School of the Art Institute of Chicago.

Produced in SoHo mainly in the latter half of the 1970′s, these videotapes give testimony to the best of experimental video art — in dance, theatre, music and the visual arts. Artists associated with the video art produced by ATN include Laurie Anderson, Gregory Battcock, John Cage, Douglas Davis, Jean Dupuy, and many others. Video exhibitions, which took place in artists’ lofts, galleries, and alternative spaces in SoHo and elsewhere, needed to create a larger audience, an exhibition outlet of its own. In 1976, several cable facilities joined with a number of individuals to organize Cable SoHo, with the goal of placing video art on Manhattan Cable Television.

Of the individuals involved in organizing this effort — video artist and painter Jaime Davidovich, video artist and journalist Douglas Davis, and Jude Quintiere, director of music at New York City’s Pacifica station WBAI – Davidovich was especially enthusiastic about cable’s potential as a medium of art and artists, and its ability to bring the artists’ work into people’s homes. For the artists, it meant the integration of the working concept of art-making as unbounded, highly individual expression, with the rigid time-space and necessarily cooperative structure of television. The programs were allowed to include artists’ work in any medium, as long as the presentation was conceived as television. The result was the production of artists’ television which focused on live performances, lectures, seminars, screenings, video art, theatre works, contemporary music compositions, street events, and two-way interaction. 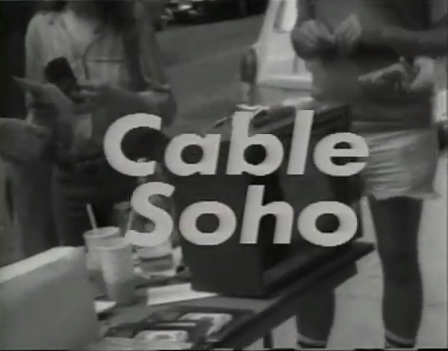