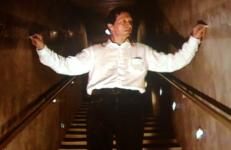 On the narrow stairway that exits Paul Kos’s Tunnel\Chapel, where his 27-channel Chartres Bleu installation is housed, Kos writes with both hands on opposite walls, recording the narrative of Noah’s Ark.

It’s a delight; not fragile yet.

It’s not hockey bashing and blades.

Not the escapades, or a snake.

It’s an expanded definition of drawing. 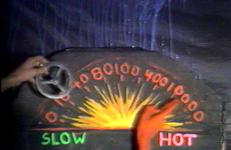 "Oursler’s thematic concerns betray classic Freudian anxieties about sex and death. In Grand Mal, the hero takes a convoluted odyssey through a landscape of disturbing experiences. The video’s free association includes, "digressions about the difference between salt and sugar and a version of the creation myth that is both banal and terrifying." 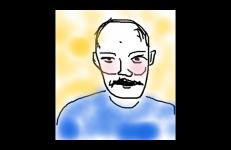 Made using voicemails the Kuchar brothers left on her home answering machine, the artist reveals George and Mike in all their candid honesty leading up to and following George’s untimely death in 2011. McGuire floats their voices along a river of digital scribbles and her own voice in singer/songwriter mode. The beauty of the piece lies partly in how the voicemails, used as-is and chronologically, contain an entire narrative about love and loss in a DIY style reminiscent of the Kuchars.