Primate Cinema: Apes as Family is a drama made expressly for chimpanzees – and the chimps' reaction to its screening at the Edinburgh Zoo. Chimpanzees watch television as a form of enrichment in captivity. But no filmmaker had made a film for a specifically ape audience. Commissioned by Arts Catalyst, and supported with an art-science grant from the Wellcome Trust, the director, in consultation with primatologists, researched chimpanzees' reactions to a variety of television genres – Teletubbies, wildlife films, human actors playing chimp behavior, kettle drums, chimpanzee display behavior. Chimps seem to like to watch the same things as human primates – dramas around food, territory, social status, and sex.

In Apes as Family, the protagonist is a young female chimp, played by a human in an animatronic costume, whose facial expressions are controlled by puppeteers. The young female, like Dorothy in the Wizard of Oz, encounters strange males on an adventure, which eventually leads back "home". The drama is intercut with the chimps’ responses to the film when it premiered at the zoo. Chimps' were attentive to the film; some sat and watched, others attempted to touch or smell the characters, and other appeared to mimic the action on screen. The project was intended to create a prism for human beings to think about the inner world of chimpanzees. By watching a movie through chimps’ eyes, we can imagine what they think and feel. Chimps are, after all, our closest relatives. Known for their complex social, cognitive and emotional lives, they also share with us a fascination with cinema.

Primate Cinema: Baboons as Friends is a two-channel video installation juxtaposing field footage of baboons with a reenactment by human actors, shot in film noir style. A tale of lust, jealousy, sex, and violence transpires simultaneously in human and non-human worlds. Beastly males, instinctively attracted to a femme fatale, fight to win her, but most are doomed to fail. The story of sexual selection is presented across species, the dark genre of film noir re-mapping the savannah to the urban jungle. As an installation, the project presents the viewer with raw field footage of baboons in Kenya, shot by primatologist, Deborah Forster. The reenactment, in high definition video, was scripted and directed by the artist with actors in Hollywood. The sound in the gallery space combines the vocalizations of the baboons with the ambience of a bar, without dialogue. The viewer may choose to listen to a narration by the primatologist, describing the behavior of primates, found on headphones. As a single channel split-screen, the film loops twice, with and without a voiceover by Forster. 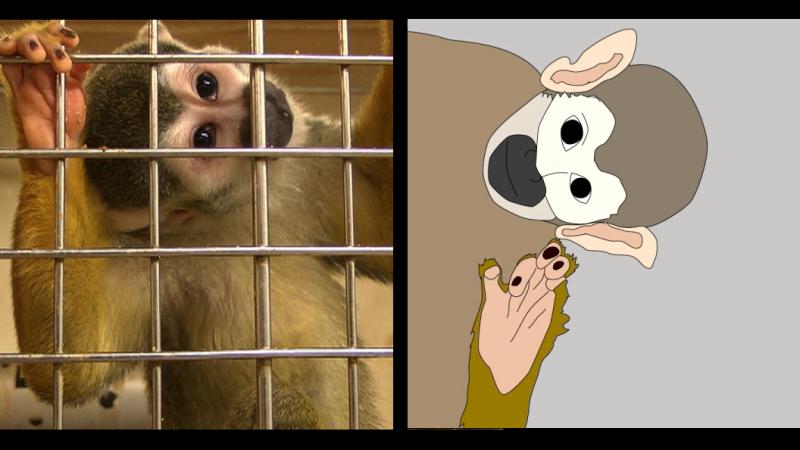 This short video documents an attempt to produce films to appeal to squirrel monkeys, who have an attention span of two seconds. The research was supported by the Mediterranean Institute for Advanced Studies (IMERA), and the video was curated and co-commissioned by Jacqui Davies/FACT for Channel 4's 25 Random Acts. An essay about the experience, which also involved making videos for baboons, is described in an essay by the artist in the book Strange Attractors: Investigations in Non-Humanoid Extraterrestrial Sexualities, (Encyclopedia Destructica, 2012).

In the video, How to Act like an Animal, workshop participants in Los Angeles reenact a clip from a wildlife documentary. The clip depicts chimpanzees hunting a red colobus monkey and then eating the meat. The clip is excerpted from the 1995 National Geographic documentary The New Chimpanzees that was shot at Jane Goodall’s research site in Gombe, Tanzania, and features the community she researched for over thirty years. Produced as part of a workshop on How to Act like an Animal co-led by Rachel Mayeri, Deborah Forster, and Alyssa Ravenwood. Cast: Suzan Averitt, Estela Garcia, Penny Folger, Dave Johnson, Diane Lefer, Adam Overton, Joe Seely