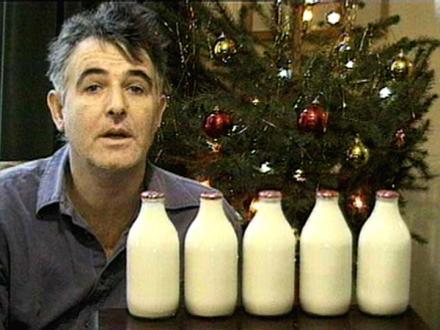 "The films of John Smith conduct a serious investigation into the combination of sound and image, but with a sense of humour that reaches out beyond the traditional avant-garde audience. His films and videos move between narrative and absurdity, constantly undermining the traditional relationship between the visual and the aural. By blurring the perceived boundaries of experimental film, fiction and documentary, Smith never delivers what he has led the spectator to expect."

A nostalgic glazier shows off his knowledge and expounds his theories. Taking glassmaking processes and history as its central theme, Slow Glass explores ideas about memory, perception and change. “…

"Blight was made in collaboration with composer Jocelyn Pook. It revolves around the building of the M11 Link Road in East London, which provoked a long and bitter campaign by local residents to…

A personal interpretation of the poetry and letters of T.S. Eliot that explores the ambiguities of language and space in a scenario built around an anagram. "A brilliant, absurd staging of Eliot’s…

Made with Ian Bourn. A depiction of the forced development of a hothouse flower. Organic growth is progressively overtaken by a more sinister mechanical process. "The makers manage very…

A portrait of the artist as a not-so-young man. The filmmaker attempts to enter the digital age by making a new video version of one of his old films. "The award of the Short Film Festival goes to a…