Kevin Jerome Everson (b.1965 Mansfield, Ohio) lives and works in Charlottesville, Virginia. He holds a MFA from Ohio University, and a BFA from the University of Akron, and is Professor of Art at the University of Virginia, Charlottesville. Everson was awarded the 2012 Alpert Award for Film/Video. His films has been the subject of mid-career retrospectives at the Tate Modern (Fall 2017); Modern and Contemporary Art Museum, Seoul, Korea (February 2017); Viennale (2014); Visions du Reel, Nyon, Switzerland (2012), The Whitney Museum of American Art, NY (2011) and Centre Pompidou, Paris in 2009.  His work has been featured at the 2008, 2012, and 2017 Whitney Biennials and the 2013 Sharjah Biennial. Everson will co-curate the 2018 Flaherty Seminar with writer/curator Greg DeCuir Jr.

In 2011, a solo exhibition of 17 short form works, More Than That: Films of Kevin Jerome Everson, was featured at the Whitney Museum of American Art. A three DVD boxed set, Broad Daylight and Other Times, was released by the Video Data Bank (U.S.) in 2011, and a compilation dedicated to films focusing on the subject of labor, I Really Hear That: Quality Control and Other Works, was released by VDB in summer 2017. The compilation contains the feature film Quality Control (2011), included in the 2012 Whitney Biennial. 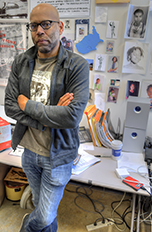